skip to main | skip to sidebar

Even the octopus has an awareness day!  We have three styles of octopod themed ear plugs for gauged ears to choose from.  Our new style, Kraken, comes in sizes 2g through 1 inch.  It is rare to find a double flared tunnel with this fine of detail in the smaller gauges, but our artisans were up for the task.  Check out all of our amazing hand carved, organic jewelry at www.avaiaartisticjewelry.com.

Do you know some famous octopods?  Scientific American has come out with of a list of 8 well known cephalopods from fact and folklore shown below. 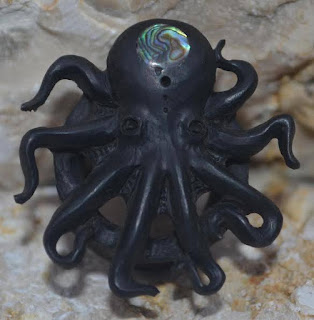 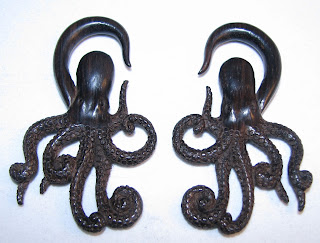 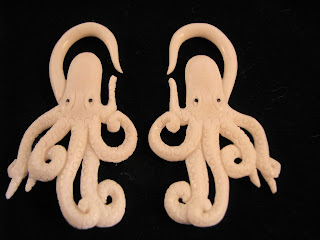 8. Billye: Who is a giant pacific octopus and is capable of opening childproof jars in lightning speed to get at treats.
7. Puget Sound GPO: A giant Pacific octopus that ended up in a clash with a diver in Seattle, Washington. The octopus lost the fight and its life but local attention was drawn to the plight of the octopod and whether or not it should be legal to hunt and serve them up as tablefare!
6. Tellaro Octopus: A fameous Italian octopus that supposedly kept pirates at bay and saved a town some 350 years ago.
5. Ozy: Another talented jar opener at the Island Bay Marine Education centre in New Zealand.
4. Kraken: Yep, you know the legend.  The Kraken loves to swallow up ships, and although it might have been a giant squid, folklore and images paint it more like an octopus
3. Shark Killer: This sneaky night stalker was ripping up the sharks that shared its tank at the Seattle Aquarium.
2. Camouflage Master: This one has gone viral on youtube. You know you want to watch it again.
1. Paul: Paul was given the number one spot for his amazing psychic abilities.  He has a knack at predicting the outcomes of soccer matches.  He resides in a German aquarium and predicted the winner of all 7 matches in the 2010 World Cup for Germany and the winner of the final match between Spain and the Netherlands.  Quite an amazing feet for an invertebrate!